Shares of Mongodb Inc (NASDAQ:MDB) have earned an average recommendation of “Buy” from the fifteen analysts that are currently covering the stock, MarketBeat reports. One investment analyst has rated the stock with a sell rating, five have issued a hold rating and nine have assigned a buy rating to the company. The average 12-month price target among brokers that have issued ratings on the stock in the last year is $50.20.

In other Mongodb news, insider Eliot Horowitz sold 9,262 shares of the business’s stock in a transaction on Monday, July 2nd. The shares were sold at an average price of $49.06, for a total value of $454,393.72. The sale was disclosed in a legal filing with the SEC, which is available through this link. Also, major shareholder Whale Rock Capital Management acquired 1,214,850 shares of the company’s stock in a transaction on Tuesday, May 8th. The stock was purchased at an average cost of $40.23 per share, for a total transaction of $48,873,415.50. The disclosure for this purchase can be found here. In the last quarter, insiders sold 156,789 shares of company stock valued at $8,952,336. 40.04% of the stock is owned by insiders.

Mongodb (NASDAQ:MDB) last issued its quarterly earnings data on Wednesday, June 6th. The company reported ($0.43) earnings per share for the quarter, hitting the consensus estimate of ($0.43). The company had revenue of $48.20 million for the quarter, compared to analysts’ expectations of $46.46 million. The business’s revenue was up 48.8% on a year-over-year basis. equities research analysts expect that Mongodb will post -2.22 EPS for the current fiscal year.

MongoDB, Inc operates as a general purpose database platform worldwide. The company offers MongoDB Enterprise Advanced, a subscription package for enterprise customers to run in the cloud, on-premise, or in a hybrid environment; MongoDB Atlas, a cloud-hosted database-as-a-service solution; and Community Server, a free-to-download version of its database, which includes the functionality that developers need to get started with MongoDB. 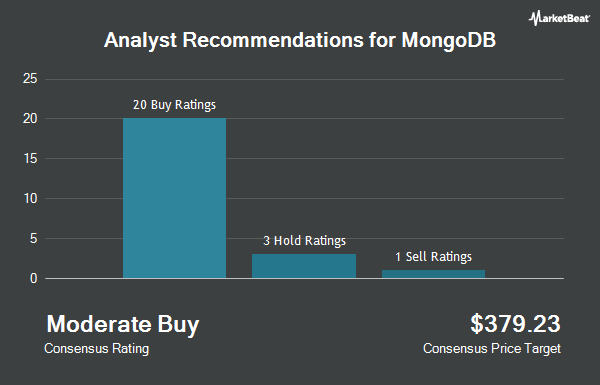 Receive News & Ratings for Mongodb Daily – Enter your email address below to receive a concise daily summary of the latest news and analysts’ ratings for Mongodb and related companies with MarketBeat.com’s FREE daily email newsletter.